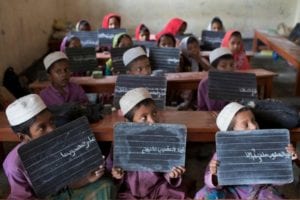 "Bangladesh Tries To Bridge The Divide Between Secular And Islamic Schooling "

In an email interview with World Politics Review, Md Shahnawaz Khan Chandan, an education activist and feature writer at The Daily Star in Dhaka, examines the short history of education reform in Bangladesh, its myriad successes and failures, and how the government has tried to bridge the divide between secular and Islamic education. Md Shahnawaz Khan Chandan is a Director of United Nations Youth and Students Association of Bangladesh.

WPR: Bangladesh has made several attempts to institute a comprehensive, liberal education policy since its independence in 1971. Has its education system met these goals?

Shahnawaz Khan: Bangladesh’s first attempt to institute a comprehensive, liberal education policy began with the formation of the Qudrat-i-Khuda Education Commission. The commission published a foundational report in 1974 that envisioned a competence-based, uniform and globally compatible education system based on the fundamentals of the newly-framed secular constitution that Bangladesh promulgated in 1972. However, after the assassination in 1975 of Sheikh Mujibur Rahman, the then- prime minister of Bangladesh, the report was shelved and forgotten. Between 1988 and 2010, Bangladesh produced three more education commission reports and two fresh education policies, all of which discarded most of the recommendations made by the Qudrat-i-Khuda Commission and promoted the political agenda of the ruling parties at the time they were published. Then, in 2009, a national education commission was established to formulate a new education policy in light of the Qudrat-i-Khuda Commission report. The policy was formulated in 2010 and is still in effect. It promised to bring significant changes to make Bangladesh’s education system more comprehensive and liberal. For instance, it introduced pre-primary education, elevated primary education up to grade eight, completely restructured the assessment system by introducing creative questions, and introduced inclusive classrooms to ensure quality education for students with special needs. However, implementation of the policy has faced serious challenges, mainly due to the lack of quality teachers and facilitators. This has led to a breakdown in pre-primary education and problems in overhauling the assessment system. In short, the country’s education system has not yet reached its goals as envisioned in the National Education Policy 2010.

WPR: What is the current rate of access to education in Bangladesh, and what are the challenges to expanding it?

Shahnawaz Khan: Bangladesh has made dramatic progress in ensuring access to education, especially at the primary level. According to a 2016 report by the World Bank, the net enrollment at the primary-school level had increased from 80 percent in 2000 to 98 percent in 2015. Net enrollment in secondary school had also increased, from 45 percent in 2000 to 54 percent in 2015. Another remarkable achievement has been ensuring gender parity in access to education, with more girls than boys in primary schools. Enrollment of girls in secondary school has also increased as the government has been providing free schooling for unmarried, rural girls up to grade 12 since 1982. One of the biggest challenges to expanding the current rate of access to education is the perception that secondary and tertiary education does not equip students with the required skills for the labor market. Thus, almost 50 percent of students who complete primary education do not enroll in secondary education. According to The World Bank Enterprise Skills Survey 2012, employers believe that graduates who receive higher education and training programs in Bangladesh are fit for neither today’s nor tomorrow’s labor market. Also, according to Bangladesh’s National Student Assessment of 2017, only 25 percent of primary school students from grades five to eight have mastery over Bengali, English and Mathematics. At the secondary level, grades nine and 10, the number is only 44 percent. The assessment further reveals that dropout rate and poor performance is more prevalent among students from poor socio-economic backgrounds. While there is no doubt that Bangladesh has achieved remarkable progress in increasing the rate of access to education over the past decade, in order to benefit from the improved enrollment rate, Bangladesh must reduce the dropout rate in secondary level education.

WPR: How has Bangladesh’s government collaborated with madrasas to get more students in classrooms, and how has the government attempted to regulate these religious schools?

Shahnawaz Khan: Bangladesh’s madrasa education is actually divided into two major systems: Qawmi and Alia. While the Alia system is regulated by the government through the Bangladesh Madrasa Education board, the Qawmi system exists completely outside the government’s purview. This is a legacy of the British attempt, in founding the Alia system, to blend Islamic and secular education, while Qawmi stood in direct opposition to government interference. Yet more than 1.4 million students study in 14,000 Qawmi madrasas, making it one of the largest education systems in Bangladesh. Initiatives to reform the Qawmi education system have been harshly rejected by its teachers. The madrasas manage their finances and all other academic activities on their own, without any intervention from the regional board or the national government, including independent boards to regulate their exams. These schools are run mostly on the private donations of Muslims. They offer free schooling as well as free food and accommodation, drawing students from poor socioeconomic backgrounds in addition to those from pious families. After completing Qawmi’s 20-year rigorous course on Islamic studies, including memorizing the entire Quran, graduates are usually employed as imams in mosques or teachers in other madrasas. Since the curricula of these madrasas are completely different than the mainstream education system, Qawmi graduates are totally absent from the corporate job market and the public sector, which has been fueling the country’s intense unemployment problem. In April 2017, Bangladeshi Prime Minister Sheikh Hasina recognized Dawrah-e-Hadith, the highest degree conferred by a Qawmi madrasa, as equivalent to a master’s degree in Islamic Studies and Arabic. The madrasa teachers welcomed this decision as it would create job opportunities for their graduates. It was also praised by educationists as a step to bring the isolated Qawmi system into the mainstream. However, this move was also criticized because it left out the other stages of Qawmi education, meaning that in order for any recognition of academic achievement a Qawmi student must reach the postgraduate level.

The interview was first published in World Politics Review on September 15, 2017